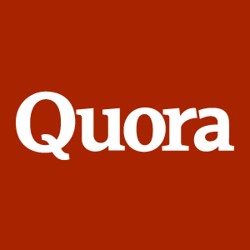 Unless you are a cool kid in the know like me, you may so far be ignorant of the new whizzbang Q+A site Quora.  Probably you should become a recluse and live in your cupboard for at least 10 years in shame and embarrassment, but alternatively you can read the following post about what Quora is and why you need to check it out.

So what is this whizzbang site?

Like I already told you, Quora is a new Q+A site ala Yahoo Answers that is taking the web by storm. If you are looking for a much more prestigious description, our good friends Wikipedia describe the site as ‘an online knowledge market’ which was launched in private beta in Dec 2009 and made available to the public in June 2010. Personally I feel like this is a massive wankfest akin to the ‘shire’ movement when I was at university, whereby every person who lived within a million km radius of the Sutherland Shire formed a secret pact to mention as many times as possible that they were from ‘The Shire’. I’m not sure what gave Sutherland Shire the right to be called ‘THE shire’ over all the other shires, but apparently doing so automatically made them better than everyone else.  Wanky.

Probably that is a little off-topic and very confusing for anyone who doesn’t live in or near Sydney, Australia, but I felt that it was crucial to my explanation.  Whether you call it a Q+A site (which it is) or ‘an online knowledge market’ (which I still think is pompous), the main point is you should check it out.

How is it different to everything else on the wide world web?

Well, it’s not really all that different. There’s nothing revolutionary about the site or the concept behind it – it’s all pretty much been done before.  What they have managed to do (and very well at that) is to take the best bits from everything already out there and meld it into one super-awesome social search site.  It’s a mish mash of Facebook, Twitter, LinkedIn, Wikipedia and other Q+A sites. And they have put it together so that it all makes perfect sense and it’s all super easy to use.

You can sign-up using your Facebook or Twitter account and start asking or answering questions immediately.  The integration with Facebook/Twitter is top-notch – it will automatically find your friends/followers that are also signed up and connect you and will also sign you up to ‘follow’ topics that you are following on these networks. It’s all pretty seamless.

Why should I care?

Because it’s cool, and there is a real opportunity to get your name out there as a thought leader in whatever subject you know stuff about.  By connecting through either Twitter or Facebook (you do also have the option to sign up using email) it legitimises your profile and lends a lot more credibility to the whole process than what you find with sites like Yahoo Answers where the person answering your question may be called ‘chickibabe69’ and have absolutely no idea about what they are talking about.

Also in the style of Wikipedia, the questions and answers are meant to stay there, open for discussion and editing, for eternity. This is unlike a lot of other Q+A sites where topics are closed after a period of time or if an answer is selected as the most appropriate.  In this way it lends itself much better to more academic or professional style questions – but also anything else that you might be wondering about, such as where is the best place to eat Mexican in Sydney (find your answer here: http://www.quora.com/Whats-the-best-place-to-eat-Mexican-food-in-Sydney?q=where+is+the+best+place+to+eat+in+Sydney).

You should also care because everyone else is getting on board and you don’t want to be left behind. Mashable have labelled the site one of the top 10 websites to watch in 2011 and techcrunch recently published a graph depicting the huge spike in registrations for the site during Dec/Jan, thereby proving that it is cool because others are using it. There’s always safety in numbers.

Is it REALLY better than all the other Q+A sites?

Yes. I’ve heard a few rumblings throughout the social mediasphere about censorship and usability problems with Quora such as inability to deactivate your account, the requirement to have your full name for sign up and the deletion of posts that are critical of the site, but from my perspective it has performed exceptionally.

There is definitely the option to deactivate your account, so perhaps this is something they have implemented recently.  As for providing your real, full name – I can’t say I disagree with this either. It is no doubt encouraging credibility in answers and enforces more of a ‘thought leader’ style forum, rather than what you might find on Yahoo Answers. Whether they delete critical posts about their own site I can’t say – I did perform a search on Quora and it didn’t return anything critical, however that is hardly conclusive.  Deleting such posts would be in violation of the Universal and Eternal Code of Social Media, however even if it were the case, I would probably forgive it for the credibility of information on other topics.

It has also been branded by many as a ‘glorified Yahoo Answers’ –  I’m not disputing that it runs on the same concept – it is, after all, a Q+A site. But the simple fact is, it’s better. It’s kinda like the movie The Social Network, where Quora is Facebook and all the other Q+A sites are whatever that site that the twins were working on, which no one cares about anymore (or ever).

According to Penn Olson, the majority of the buzz about Quora is positive – Sysomos’s sentimental analysis showed 52% of conversations were positive, with only 13% negative. Not bad. 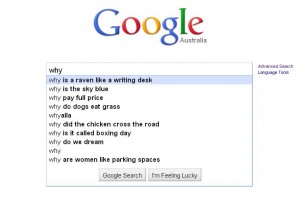 Perhaps it is not the best site to ask the typical dribble you see on Yahoo Answers like why is a raven like a desk, or why did the chicken cross the road or even why women are like parking spaces (see right) – but more a space for people to find help about real, serious topics from real, serious thought leaders or experts.  At least, that is what it feels like to me.

Whether it will be able to fight the titan of Facebook (and Facebook Answers), remains to be seen, but I for one hope it does.

In the face of such behemoths you think there would be little chance, but the ‘retiring’ of Google Answers is surely a sign that the web powerhouses do not always get all the spoils – maybe it’s best they stick to what they know best and leave some room for some other smaller players.

Evidence so far suggests Quora is winning the race, but time will tell. In the meantime, check it out.